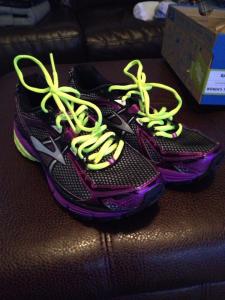 Multiple chiropractor visits-Lost count of how much I’ve spent

Being able to run for a decent distance, at a decent pace, completely pain free-PRICELESS

Except I haven’t gotten to the last part yet, and I’m pretty bummed and frustrated. My troubles started last December when I bought a pair of new shoes. I finally went to a “professional” to be fitted, and they put me in a neutral shoe. Almost immediately pain started on the outside of my right knee. It got worse over the course of 5-6 weeks and long runs left me limping, unable to do stairs. My IT band was not happy with me. The IT band is a long band that runs from your hip down the outside of your leg and attaches right below your knee. 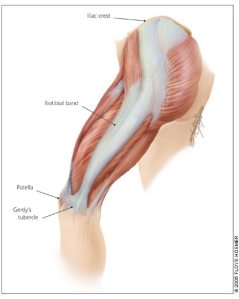 Before I started running and even after, I’d never once heard of the illiotibial band. I had no problems running, no pain, no injuries. I pitied all of those poor people who had to foam roll, stretch, take ice baths, etc because of pain. I was young, I was invincible. That was, until I got injured.

After my knee pain started when I bought my first pair of new shoes, it took me a bit to realize it was the shoes. I went into a different running store and they told me in no way should I be in a neutral shoe, I over-pronate, I need different shoes. Return the first shoes, run a long run in my old shoes and voila, pain gone! But I still needed new shoes. I was less than 4 weeks from my half marathon, my old shoes would not take me through that, and they were a bit too small(did you know you should always go 1/2-1 size up in running shoes? because I didn’t!). I got put into a second pair of shoes, a pair of stability shoes to help control my pronation. I did a quick run in them the day I bought them and they felt good. The following day I went out for 8 miles, still no pain in my right knee. Ah but what’s that? What’s that twinge? Pain? Yes, pain, in my left knee. Same pain as I had on the other side. All of this time I had no issues with my left knee, and 3 weeks before a half marathon is starts to hurt. The pain only got worse between then and the half marathon. I did my long runs on Sundays, and they left me hurting in a bad way. I could not walk up or down stairs, I could barely walk at all. Each Monday I saw my chiropractor, he worked magic, and got me feeling better, until the following Sunday. I had no time to rest, as the race was quickly approaching. I knew what I was in for during the race. I knew if I took Ibuprofen I would at least deal with a low level of pain, not enough to stop me(for the record, Ibuprofen and running is a huge no-no). I also knew that I had to run or jog. If I stopped for pictures, stopped to walk, stopped to go to the bathroom, starting running again would be extremely painful and there was a chance I’d be walking(another for the record, if you are hurting and an action is painful, don’t do that action, and don’t keep doing that action for 12 miles). But I had no choice. Too much time and money invested into this race and this trip. I pushed through it.

Yes, I’m proud of myself in a way for doing that. It wasn’t all that smart to ignore my body’s pain, but normally I’m a big wimp. First sign of pain, take the easiest way out. It’s why I have epidurals during child birth. But I resolved to finish the race and push past the pain.

Post-race was rough. I could barely walk. I was in a lot of pain. Normally the pain after would go away in a day or two, but it didn’t this time, and 8 days after my half I was at the orthopedic doctor. He checked my knee out, did X-Rays, and diagnosed me with what I already knew I had, ITBS, or Illiotibial Band Syndrome. The band got super tight, formed adhesions around my muscles, got even tighter and rubbed on the tissue under where the band connects at my knee, making that tissue extremely angry. He gave me a cortisone injection(ah relief!) and suggested I start physical therapy. I could start running again, slowly.

I took in very easy when starting PT. 1-2 miles a couple of times a week, mostly walking, with the exception of an 8k race a few weeks after starting. Thanks to KT Tape and lots of stretching I had very little pain while running that race. But it was still there. I wasn’t sure whether I should be thrilled that I had so little pain or worried that I did have some pain. The physical therapist said my issue is most likely core issues. I have very weak glutes, hips, abs, back, etc. You’d think all of the exercise I do would help, but no. Add to that having 4 babies, and everything in that area is all kinds of bendy and twisted up. My right hip doesn’t have the mobility my left does, I actually lean to my right side when I run, my gait is horrid, and I’m all kinds of off balance. This looks to be putting a lot of stress on my left leg as it overcompensates for the lack of core muscles and everything going on with my right side. So we start building up these areas and stretching. We try a lot of different things and I’m still having some pain when running, and I’m most certainly not running long or hard.

On a whim, last week, I wonder if it could be a shoe issue. Again. After all, the left leg went bad as soon as I got the 2nd pair of shoes(you know, the ones I bought to correct the problems my first pair caused). So last week my PT agreed that I should try another pair of shoes. I put on the old trusty pair again(the worn down, too small pair), and hopped on the treadmill. I alternated 1/2 mile of walking with 1/2 mile of running, for over 2 miles. No pain. None. I was thrilled, but also kicking myself because I’ve spent so much money on medical treatment, when it was simply a shoe issue again. I decided to put myself to the test(in the old shoes again) and attempt 5 miles, running, this past Sunday. In hindsight, this was a bad idea, shoe issue or not. A mile or so in, my knee started hurting. Like really hurting, not the low level of pain I’d been dealing with since I started treatment. I ran for the first 3 miles, in some pain(bad April, bad bad April), stopped to stretch, I felt better but it wasn’t long before the pain returned. I cut things short and walked the rest of the way back to my car, managing 4 1/2 miles. I felt defeated.

I’m an impatient person. When I want something, I want it immediately. So when I want my knee fixed, I want it done immediately. When it does not happen, it frustrates me. Running has become part of my life. Taking time off and figuring my body’s issues out and correcting them, while letting my leg settle down, is not my idea of fun. I hopped on my computer and consulted with Dr. Google. I came across a certain kind of massage, called myofascial release. Lucky for me, one of the ladies in my local Moms Run This Town group is a massage therapist and works with this technique, and she also has issues with ITBS, so she feels my pain. I was in her office Monday morning(told you, I’m impatient). Ohhhh a massage you say, how nice you say. 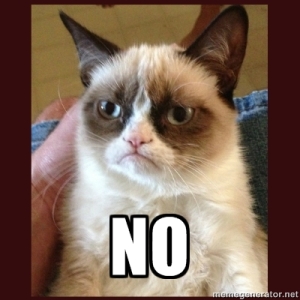 There is nothing relaxing or comfortable about this kind of massage. There is pressure, there is pain. Add having to bring your two year old to the mix, and well it’s not as relaxing as one would think. But it helped. I’ve got lots of knots and adhesions along my band. After our session, she recommending I visit my chiropractor. I scaled back my visits when I started physical therapy, and he wasn’t pleased to see me back with him again, still dealing with the same issue. He decided to take a different approached. I like to call it controlled electrocution. He attached two paddles to my leg to stimulate it. It was a very odd feeling, but after I got home, my leg felt a lot better, aside from the bruised feeling the massage left me with, which is very normal. I went back for round two of the leg electrocution on Wednesday and back for another massage today. We will go through that routine again next week.

I also saw my PT to report back to her. She does think it is an issue with the shoes, but that I’ve also reached a point in my injury where it isn’t going to magically or immediately get better, allowing me to jump right back in to long runs. So we continue on. I’ll keep going with the PT, the massage, the stim. Next week I’ll start back in slowly. Aside from not being able to actually run, the next hardest part is the idea of easing back in. My body is conditioned for long distance running. I ran a half marathon less than 2 months ago. 1 or 2 miles is a warm up for me now. But not according to my knee. I have to go slow. Next week, while I can do plenty of walking, I can only run for a few minutes, at a very slow pace. That’s it, until the next week. It’s like I’m starting all over again, and I’ve worked so hard. It almost feels like I’ve erased all that hard work. Now I have to build myself up to being able to run a mile straight, not working on endurance, but simply being pain free. It’s a very frustrating and helpless feeling. But I know if I have any hope of running 2 half marathons in 14 days this fall, I need to be as close to 100% as possible, so it’s a necessary evil.

One thought on “IRL. No, not In Real Life, the Injured Reserve List.”