I love that I have kept decent documentation of my journey since I started. Yesterday, I ran my first real race since I ran the Princess Half Marathon. It was “only” an 8k(as if I’ve turned in to some kind of distance snob), but it was really the first real push I’ve given myself since the half and since I’ve started treating my ITBS. Since being diagnosed with ITBS a couple of weeks ago and taking more aggressive steps in getting better, I haven’t been training hardcore. I haven’t really needed to since my next half marathon isn’t until the end of October, but I do want to maintain between now and when I do need to start climbing into the higher miles again. However, trying to not only recover from an injury but build myself up so it doesn’t happen again has put a damper on my maintenance. I had to over a week off after the half from running, due to pain I had lingering after that race and the subsequent cortisone shot I got when I visited the orthopedic doctor, and after that I got back on the treadmill pretty slowly, with a lot of walking and only small running intervals, never more than half a mile at a time.

I was actually nervous going in to this race. I kept thinking “I did a half marathon less than 3 weeks ago, why am I nervous?” but it didn’t calm my fears. I had grand plans for my pace. I wanted to finish in 55 minutes, which was an 11 minute per mile pace. In the weeks leading up to the half, and during that race, my pace slowed because of the distance I was running and my injury. I don’t have exact numbers, but my average pace for the half was about 12:30 per mile. I was afraid the pace was a bit too fast coming off of my injury. But I was hopeful. I was dressed in my green, representing my favorite running group, the Pacebook Running Club, KT Taped up, and ready to run. 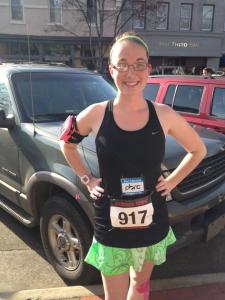 Pre-race I ran into my favorite Zumba instructor Molly. I knew she ran races and it was a pleasant surprise to see her there. We began the race, and about half of a mile in, I saw Molly pass me. I challenged myself to try to keep up with her, I figured she was probably pretty quick. I managed to keep up with her for less than 2 miles, staying right behind her and keeping her in my sights. That’s when the hills started, and that’s when I started slowing down. I did notice a twinge in my knee but nothing terribly painful and nothing that slowed me down. The hills on the other hand, they were wicked, and they did slow me down. But I kept going. I was thrilled to cross the finish line in under 52 minutes, official time was 51:18, which was under a 10:30 mm pace. I met my goal, and then I killed it. I saw Molly at the finish line(she only finished about 5 minutes ahead of me!) and I thanked her for unknowingly keeping me on pace.

Reflecting on this race, I realized how far I’ve come. I looked back at the pictures I’d saved of my distances and times over the past 8 months. It was last August that I first reached 4-5 miles. Reading my comments on this picture, I was pushing myself and running this distance at over a 13 minutes per mile(with no hills, flat running). This picture was from an August 10, 2012 run:

That was my farthest run at the time. Since then, I have climbed to being able to run 13.45 miles, and I have shaved about 3 minutes off my pace(for that distance), with hills. 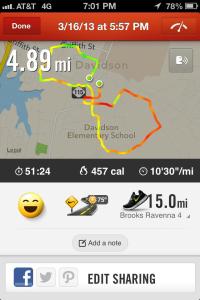 I’m proud seeing my progress. I’m looking forward to getting better and nailing my future goals.