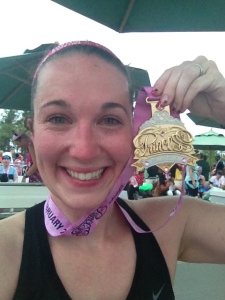 This will be short, but I intend to do a full race weekend re-cap in the next few days. Unfortunately, my work has piled up in my absence(totally worth it!!) and I need to play catch up on that before I play catch up on my blog. But I did want to say that I did it, I am officially a Princess! This was not easy. Yes, I trained for it, but actually doing it was tougher than I thought it would be. Conditions were a little rough. I was used to training either inside or out in the “cold”(cold for me being in the 40s) with little to no humidity. For the race we started in 70 degree weather, with 94% humidity. Had it just been the temperature it would have been great, but the humidity was killer. But I pushed through and was pretty proud of my time. I wanted a time of under 3 hours, and I got it, 2:48:28. It was tough but I had such a great time. Disney knows how to put on a great race, and the trip itself was nothing short of magical. Look for my coming posts on how the weekend played out!